The version of the Act of Contrition I was taught in my Catholic grade school said something like, “I’m sorry for my sins because I dread the loss of heaven and the pain of hell.” That is not a version that works for me as an adult Christian. It makes it sound like what makes us follow Jesus is the desire and hope for future reward and avoidance of future punishment. Be good, follow the rules today because of what it will bring in the future. But that is not what it is about at all.

Shane Claiborne, in his book The Irresistible Revolution quotes his teacher Tony Campolo as asking: “Even if there were no heaven and there were no hell, would you still follow Jesus? Would you follow him for the life, joy, and fulfillment he gives you right now?”

And Claiborne’s response is: “I am more and more convinced each day,” he says, “that I would.” If he were St. Paul, he might have phrased it, “The love of Christ impels me.”

How do you answer the question put by Campolo?

How do you describe the motivation for your spiritual life?

In today’s Gospel we hear Matthew’s account of Jesus’ temptation in the desert.  Immediately after his powerful experience of hearing his father’s voice during his baptism, Jesus is driven into the desert where he is tempted by the devil.

This is a passage I have prayed with frequently and have often talked about it during retreats.  I have heard the temptations characterized in various ways, but was struck by how Barbara Brown Taylor talks about them in her book Holy Envy.  It was almost an aside for Taylor, a lead in to her discussion of Jesus’ preaching his first sermon in Nazareth.  She describes Jesus as being “sorely tested by self-interest,” writing

The devil had suggested all kinds of ways that Jesus could take magnificent care of himself- by turning a stone into a loaf of bread to end his hunger, by becoming king of the world to secure his power, by summoning angels to protect him from all harm  All Jesus had to do was ask, the devil said, and God would make sure that he did not so much as stub a toe.

The passage on Jesus’ temptation is always a good one to pray with, especially during Lent.  In doing so, you might reflect on where you are tempted to act in ways that reflect only your self-interest, rather than the interest of others.

I just read Stephen Mitchell’s Joseph and the Way of Forgiveness, a retelling of the Biblical story of Joseph, Jacob’s favorite son who is sold into slavery by his brothers.  It is a story we are all familiar with, and one that has spawned many books and movies.

In the forward of his book, Mitchell explains that what attracted him to the story was “what it left unsaid” in the sparse, concise narrative.  “It cries out for the ancient Jewish art of midrash, or creative transformation — a way of inhabiting the text in order to deepen your understanding of it.”

I confess a particular fondness for midrash-type narratives that encourage deeper reflections on biblical stories.  And whether one names this book fiction or midrash, it is an engrossing read.  (I read the book in a single sitting.)  The story of forgiveness is powerful, but so too is the depiction of the growth of Joseph’s faith in God (as well as a growth of humility), and his conviction that “a misfortune is a blessing that has not yet been recognized,” that “behind its sometimes fearsome disguises [blessing] was always waiting to be discovered.”

As in any good work, the insights are timeless, transcending the specifics of the story…

…that forgiveness doesn’t have to be deserved or earned, but acceptance of forgiveness requires awareness of wrongdoing and remorse.

…that there is always God’s blessing, even in in our misfortune.

…that in a state of inner alertness we can and will find the voice of God.

You might consider adding this book to your Lent reading.

Today is Ash Wednesday and the beginning of the 40-day period of Lent.

The three traditional Lenten practices are fasting, prayer and almsgiving.

For many of us who grew up Catholic, our childhood fasting during Lent took the form of giving up some favorite food item. (“What are you giving up?” was one of the most frequently asked questions of the season.) Giving up chocolate was common. Or soft drinks. The really daring might vow to forego all desserts. The habits of childhood often last well into adulthood; my sister still gives up chocolate every year for Lent and one of my friends gives up beer each Lent.

There is, of course, value to the discipline of fasting, especially if we do more than the current Catholic requirement for fasting on Ash Wednesday and Good Friday, which is not really all that onerous. (One full meal and two small meals that together are less than one full meal.  And feeling hunger when we fast reminds us of the condition many people live with daily, and not as a matter of choice.

But the Book of Isaiah tells us that that is not necessarily the fasting God seeks of us:

Do you call this a fast acceptable to the Lord? This, rather, is the fasting that I wish: releasing those bound unjustly, untying the thongs of the yoke; Setting free the oppressed, breaking every yoke; Sharing your bread with the hungry, sheltering the oppressed and the homeless; Clothing the naked when you see them, and not turning your back on your own.

Here are some other suggestions for meaningful fasting during Lent: 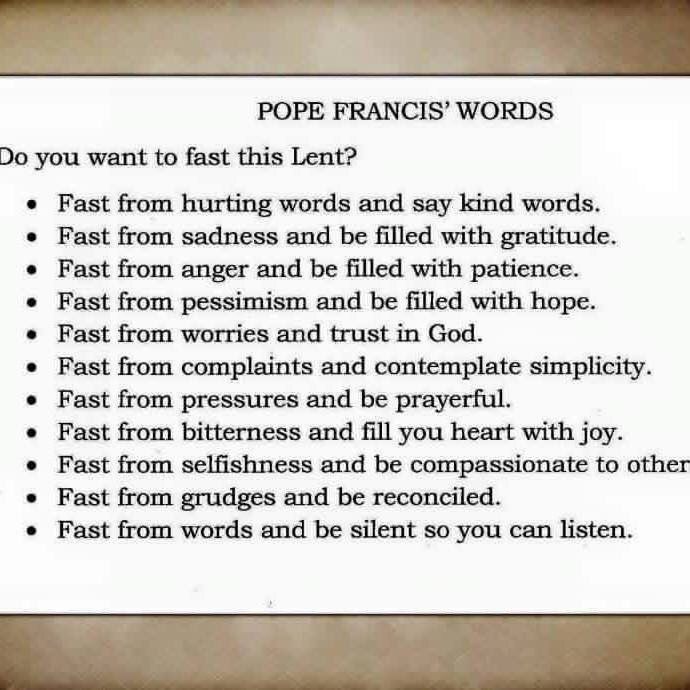 In his book And the Angels Were Silent, Max Lucado talks about the women who anointed Jesus at the home of Simon – an act that takes place not long before Jesus’ death, calling her act one of “risky love.”

The disciples mock the extravagance of pouring so much expensive perfume over Jesus’ head.  “Why waste that perfume?  It could have been sold for a great deal of money and given to the poor.”

Lucado goes on to give examples that suggest how easy it is to miss it.  The boy who doesn’t defend his younger brother who is being bullied.  The husband who gets his wife a practical gift instead of something she will love, thinking, I’ll buy the other someday.

But there is a problem with someday:

Someday.  The enemy of risky love is a snake whose tongue has mastered the talk of deception.  “Someday,” he hisses.

“Someday, I can take her on the cruise.”

“Someday, I will have time to call and chat.”

“Someday, the children will understand why I was so busy.”

But you know the truth, don’t you?  You now even before I write it.  You could say it better than I.

And the price of practicality is sometimes higher than extravagance.

The rewards of risky love, however, are always greater than its cost.

What are you putting off?  What opportunity for risky love are you missing?

In today’s Gospel from St. Mark, Jesus encounters a woman who asks him to drive a demon out of her daughter/  Mark describes the woman as “a Greek, a Syrophoenician by birth.”  In other words, not one of the sheep of the house of Israel.

Jesus response to the woman is incredibly harsh: “Let the children be fed first. For it is not right to take the food of the children and throw it to the dogs.”  (Although Mark doesn’t elaborate, Matthew’s version of this encounter embellishes the response, with Jesus explaining,”I was sent only to the lost sheep of the house of Israel.”)

The woman, however, does not accept no for an answer. She argues, “even the dogs under the table eat the children’s scraps.” Her argument prevails and Jesus heals her daughter.

Jesus was open to growing into a wider understanding of his mission – a growth that led him  to later instruct his disciples to go not only to the lost sheep of the house of Israel, but to proclaim the gospel throughout the whole world.

This encounter provides a good lesson for us. When we are so sure that we have it right, it is good to remember that even Jesus needed to grow into an understanding of his mission. It was not fully clear to him from the get-go. Fully human as well as fully divine, Jesus had to grow in knowledge and understanding.

And if he had to grow, surely we do as well.

One of the books I am currently reading is Dietrich Bonhoeffer’s Life Together, written while he taught in an underground seminary during the Nazi period in Germany.  In it Bonhoeffer talks about many matters related to Christian community,  as well as the role of personal prayer.

Bonhoeffer addresses what he perceives to be a “negative attitude toward silence which sees it as a disparagement of God’s revelation in the Word.”  His response seeing silence as “a mystical desire to get beyond the Word” misinterprets silence.  He writes

This [view] is to miss the essential relationship of silence to the Word.  Silence is the simple stillness of the individual under the Word of God.  We are silent before hearing the Word because our thoughts are already directed to the Word, as a child is quiet when he enters his father’s room.  We are silent after hearing the Word because the Word is still speaking and dwelling within us.  We are silent at the beginning of the day because God should have the first word, and we are silent before going to sleep because the last word also belongs to God.  We keep silence solely for the sake of the Word, and therefore not to show disregard for the Word but rather to honor and receive it.

He goes on to describe Christian silence as “humble stillness, that may be interrupted at any time for the sake of humility.  it is silence in conjunction with the Word.”

Bonhoeffer’s words are a reminder that the Word matters, but so also does the stillness that allows the Word to speak to us, to know what it is that God’s Word has to say to us individually.

I have a website, where you can find, in one place, information about my books and other writings, retreats and talks, podcasts and videos, and more. Check it out here.

“Growing in Love and Wisdom”

Growing in Love and Wisdom: Tibetan Buddhist Sources for Christian Meditation can be purchased from Amazon here. Or you can order it directly from the Oxford University Press here.

You can find a list of upcoming retreats and other programs I will be offering on my website here.